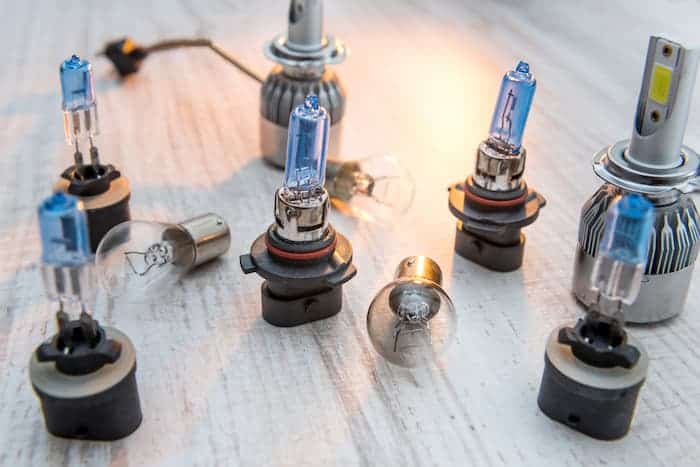 LED vs HID headlights – which headlight bulb is better

HID headlights, like LEDs, provide a brighter light than halogens while still being more assertive in precision. It is for this purpose that you see a lot of car owners upgrade from stock Halogen bulbs to HID or LED headlights as they are twice brighter and more durable with easily accessible replacement parts. In the early 1990s, HIDs were first used in luxurious cars. But with the advent of technology, they were modified to fit into standard cars with plastic headlights housing.  HID lights are also known for their distinctive blue tint, which gives them a distinct “cool” look and makes them famous among car enthusiasts.

They’re available as complete car headlight replacements or as plug-in kits. HIDs, like LED kits, require an additional electronic component called a ballast. The ballast serves a variety of purposes. To begin the arc, it generates a high-voltage pulse. The current flow to the bulb is then monitored and regulated for proper operation. In comparison to the car’s DC supply, this is usually in the form of AC power. The ballast is a small sealed device about the size of a cigarette box.

Contents hide
1. What are LEDs?
2. What are HIDs?
3. HID vs LED: The Pros and Cons
4. LED and HID headlights are superior to halogen headlights
5. Conclusion

The term “light-emitting diode” (LED) refers to a device that emits light. LEDs, unlike halogen lamps, do not have a filament through which the current passes. Instead, LED utilizes a semiconductor to give current. The movement of electrons generates light.

A semiconductor material made up of positively and negatively charged parts is found within each LED bulb. As electricity is applied to the semiconductor and the light is switched on, electrons become charged and begin to flow from a negative to a positive layer. The excited electrons emit photons of light as they pass through the hole in the material, causing the LED to light up.

LEDs have been in use for quite some time. With a lot of DIY Car enthusiasts converting from manual headlights to automatic using LED bulbs, You’ll find them in your smartphone and laptop, even though they’re over a decade old. They’re ideal for such applications because of their small size and low power consumption. They also produce very little heat in low-current applications.

HID is the abbreviation for high-intensity discharge. It’s also known as a xenon lamp, which refers to the gas that the bulb contains. It varies from both halogen and LED bulbs in that an electric arc generates its light between two tungsten electrodes.

HIDs are a type of gas-discharge arc lamp that produces light by transmitting an electrical current between two electrodes and a gas that has been ionized. When charged electrons interact with the gas and change orbits, light is emitted from the arc. Inside a quartz glass capsule, everything is hermetically sealed. Extra gas is frequently used, which aids in distinguishing between the three main types of HIDs: sodium, mercury, and metal halide. A ballast is required for every HID to regulate its power and generate the initial surge of electricity that allows the light to turn on. These lamps are known for producing more light while using less energy than halogen bulbs.

While we have seen car owners convert from HID headlights to Halogen bulbs, HID lamps are most commonly used in large-area lightings, such as street lamps and floor lamps in stadiums. They are twice as effective as halogen lights and provide a whiter glow. This is a critical consideration for places that need continuous high-power lighting.

HID vs LED: The Pros and Cons

At the moment, HIDs are the more advanced technology. They’ve been in use for more than two decades and are well-known in the industry. LEDs are newer on the scene, but they are quickly catching up to HIDs in terms of popularity and technology.

LEDs reign supreme in terms of brightness. HIDs perform admirably, and some can even match the brightness of LEDs, but in a standard comparison, the LED will win. It’s debatable whether it’s to a degree that matters to you, but objectively speaking, they’re the brightest.

HIDs have a wider range of color temperatures, ranging from 3,000K to 30,000K and beyond. LEDs have a smaller color temperature range, ranging from 3,000K to 10,000K. Most people will opt for a color in the 4,000K to 6,000K range, regardless of what is available. These are the colors that most closely resemble daylight and provide the best results when driving at night.

HIDs have a short warmup period, on the order of 5 seconds, due to their nature. You don’t have the best lighting at this time. LEDs, on the other hand, have an instant-on capability, allowing you to go from darkness to full brightness in seconds. Lights are usually turned on while the car is stationary, so this isn’t a big deal.

In addition to visible light, HIDs produce light in the infrared (IR) spectrum. This is advantageous for people who live in colder climates because it aids in the melting of snow and ice, which could otherwise obstruct headlights. LEDs do not produce infrared light. By blowing hot air onto the headlamp lens, manufacturers have attempted to replicate the function. Retrofits won’t help with this, but if you live in a temperate climate, it won’t be an issue.

HID and LED kits come in a variety of price ranges. HID kits can be up to half the price of LED kits when comparing products with similar performance characteristics. This is because LEDs are still a relatively new technology. This, too, is about to change. The lifetime of the products is a counter-argument from LED proponents. Whereas LED kits claim to last up to 30,000 hours, HID kits only last about 2,500 hours.

LED and HID headlights are superior to halogen headlights

HID and LED bulbs are now widely accepted as far superior to halogen bulbs. Unfortunately, due to a significant price difference, halogen bulbs are still used in the majority of new cars. As a result, HID and LED headlights are only available on higher-priced vehicles or as an add-on.

Fortunately, there is a thriving aftermarket scene to cater to the needs of those who want to upgrade their older vehicles with newer technology. So, for this article, we’ll ignore our old pal halogen and concentrate solely on HID and LED technology.

When you consider upgrading your vehicle, you’re probably thinking about all of the bigger improvements you can make. It does not, however, have to be anything significant to be worthwhile. Whether you opt-in for a LED bulb or an HID bulb, the truth is that they will at some point get oxidized and probably emit almost the same amount of beam if not carefully restored using a headlight restoration wipe. There is no quick, fast, reliable, and reasonably inexpensive improvement you can make right now as regards your head bulbs but you can certainly know when to change them for a newer one. When it comes to headlights, halogen lights used to be the industry norm, but that is no longer the case. Headlight technology has progressed significantly over the years and we have seen the continuous release of innovative lighting systems such as the laser beam and bendable headlights.