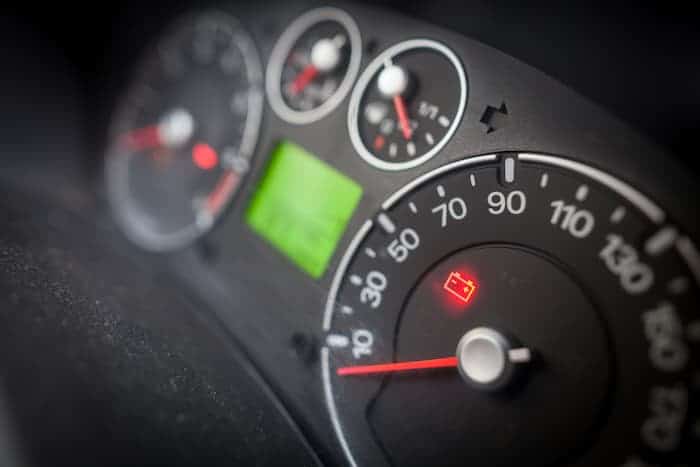 How long can you drive with battery light on

A rechargeable 12-volt battery is now found in every gasoline-powered or hybrid vehicle. Everything electrical is powered by this battery: the engine’s control system, the ignition system, the radio, the headlights, and so on. As a result, the battery is critical to the vehicle’s functionality. A car’s battery (12-volt), like other batteries, would ultimately die if it isn’t recharged; hence it has a built-in recharging system. When the engine is operating, the voltage regulator and alternator charge the battery and give power to the vehicle. So, how long can you drive with the battery light on?

As a car owner, you have to be familiar with the different lights on your dashboard and their meanings. Some vehicle lights turn on and stay on for days, even weeks, before the actual fault that the light is indicating manifests. When your car battery light comes on, it’s an occurrence you shouldn’t take lightly. While some other light signals whose effects may take some time to manifest, if your car’s battery light on dash activates, the problem will manifest itself within minutes by stalling your car’s engine or battery not charging. This situation can leave you stranded until help arrives.

What it means when your car battery light is on

Have you ever had a sudden breakdown while driving that was later traced back to a battery problem? Have you ever experienced difficulty in starting your car after it stalled? Most likely, you could have avoided those annoying situations if you had paid attention to the battery warning light, which was on the entire time; or, better yet, if you had understood what it represented before the actual problem caused your car’s engine to shut down, leaving you stranded.

When your car’s battery light comes on and stays on, it means your car is having trouble with one of the following;

How long can you drive car with the battery light on

If your battery light turns on while driving, you’ll have about 30-60 minutes to drive before your car starts to stall. There are a number of things that could cause your car’s battery to deteriorate and one is leaving your car headlights on while the engine isn’t in operation. Car headlights can come on by themselves if your car lights have a problem with its fuse. To fix this issue, you can change your headlight relay or replace your car headlight bulbs.

How to fix your car battery light

To begin, turn off every electrical component in your car, such as the HVAC system, the radio, disable power windows, unplug your phone from the car charger, and so on, because you know that once your car’s battery light is on, your car’s engine may turn off in the next minutes because the battery isn’t charging again. This step ensures that you have adequate battery power to get to a mechanic’s shop, your home, or a public location to fix the problem (if your location is a lonely road).

Starting your car’s engine requires enough voltage; you must make sure you don’t turn it off until you’ve arrived at a perfect location where you can comfortably remedy the situation. Then, as soon as you get to a safe location to diagnose and remedy the problem, do the following;

Check the car battery and look for any signs of damage or corrosion to the terminals. If there is corrosion, find a way to clean it; double-check that the clamps are tightly fastened to the battery’s terminal.

The fuses may or may not cause faults with your car’s battery charging system. However, there may be a blown fuse between the alternator and the battery. This issue can cause the car’s battery light to activate. You should also inspect for a worn serpentine belt and replace it if necessary.

After checking your car’s battery and other connecting components to determine if any loose connections or other defects may be causing the battery light to activate, test the battery by starting the engine to check if the light illuminates again. If it doesn’t, you’ve solved the problem; if it does, your car’s alternator is most likely the source of the problem.
Please make an appointment with a mechanic to have it fixed. However, keep in mind that your car may still run perfectly even if your battery light is on. Lastly, ensure your car’s headlights are working properly as bad headlights can take more energy from your car’s battery than it should. If your car’s lights are functioning perfectly, endeavor to have your headlight lense cleaned using a restoration wipe so as to enjoy clear visibility.